48% Of LCAs Filed During H-1B Cap Season - Where’s The Automation?

"Cap season,” the H-1B visa equivalent of “tax season,” is anything but fun for immigration attorneys and in-house immigration specialists across the U.S. We do all we can to streamline the process: divide work based on service center, alphabetize FedEx packages, hire seasonal help, and so on.

But we often overlook all the LCAs and public access files that are very much part and parcel the H-1B process. We go on posting hard copy LCAs and creating physical PAFs, ignoring the need for automation. We don’t often think about cap season from the perspective of the LCA, but what if we did?

Because of this volume, immigration tech is hyper-focused on streamlining the H-1B process. INSZoom, LawLogix and others make it a point to sell the ease and efficiency of their software, with great emphasis on client communication, USCIS forms and more. But in a way they overlook one major piece of the H-1B visa puzzle: the LCA. 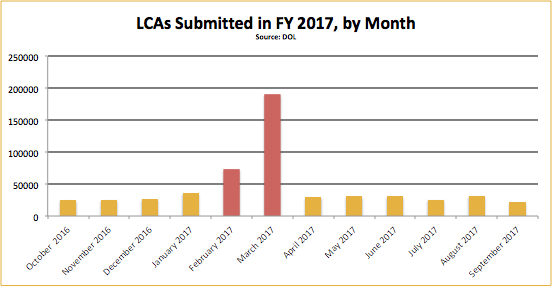 This tells us that immigration attorneys and in-house immigration specialists are swamped with DOL paperwork during cap season.

Today, most of the immigration tech platforms leave LCA posting and PAF management up to the user. Because of that, a large majority of petitioners still post hard copy LCAs and create hard copy PAFs. Sure, some companies are starting to provide users digital PAFs, though they’re still ignoring LCA posting.

How is this still acceptable? How is it that there’s software to automate USCIS paperwork - fillable I-129s, document tracking, H-1B reports, etc. - but when it comes time to post an LCA or manage a PAF, it’s overwhelmingly manual?

If there has ever been a time to embrace LCA and PAF automation, it’s now. DOL first embraced this idea in 2000 when they added 20 CFR § 655.734(a)(1)(ii)(B), allowing electronic LCA notice. Specifically, the regulation states that an employer can provide LCA notice electronically by means it “ordinarily uses to communicate with its workers about job vacancies or promotion opportunities, including through its ‘home page’ or ‘electronic bulletin board’ to employees who have, as a practical matter, direct access to these resources; or through e-mail or an actively circulated electronic message such as the employer's newsletter."

And since each LCA is tied to a corresponding PAF that can now be stored digitally, there’s no excuse for paperwork.

Finally, there’s the compliance side of things. H-1B compliance is becoming increasingly important and employers with multiple offices as well as consulting companies that place H-1B employees at third party worksites are paying closer attention to their LCAs and PAFs. Automating the process minimizes human error, especially during the craziness of cap season, allows for easier reporting and enables file sharing in case of an audit.

That's why we built LaborLess. After working in immigration law and handling way too many hard copy LCAs and PAFs, we knew it was time for automation. LaborLess securely posts electronic LCAs, creates and stores digital PAFs, and lets you manage everything from a centralized dashboard. It isn’t the only way to post electronic LCAs, but we think it’s the best.