The Government Is Updating Their Immigration Technology. And No One’s Talking About It.

Early this week I was having one of those exciting, inspiring conversations about immigration technology with a colleague from SHRM. We spoke about current events, recent VC funding rounds for immigration tech startups, what the future has in store and more.

At some point during the conversation, though, he mentioned the word “flag.” “As in the American flag?” I asked. No, he replied, not that kind of flag. F-L-A-G, all caps. It’s a new system the DOL is currently rolling out.

I’m loath to admit this now, but I had no idea what he was talking about.

I quickly opened up a new tab on my already-crowded Chrome browser and typed in the words, “FLAG” and “Department of Labor.” And when the search results came up, I was in complete shock.

There it was, the very first Google search result, staring directly at me: “The Foreign Labor Application Gateway (FLAG) is a cloud-based portal designed to replace OFLC's current iCERT System…”

I tried to keep my cool for a few moments, but then I couldn’t hold back and finally exclaimed, “HOW THE HELL DID I NOT KNOW ABOUT THIS?!”

Over the next few days, I realized that I wasn’t alone in having no idea that DOL was rolling out an entirely new portal for labor certifications and prevailing wage determinations. I dug through the depths of the internet for announcements, social media posts, government documents, anything I could find. Ultimately I came up with very little.

So I decided to write about what I did find. Let’s dive in.

What is this all about?

In short, DOL’s Office of Foreign Labor Certification (OFLC), which is in charge of certifying foreign candidates to work in the US, is updating its current portal. The most informative document I found on the matter was a slide deck that DOL published that gives a very high-level overview of their technology modernization efforts.

According to the deck, the current portal portal, iCERT, is “decades old,” “inadequate,” and “unstable and not scalable” among other things. Yikes.

But here’s what DOL is promising with the new FLAG system: 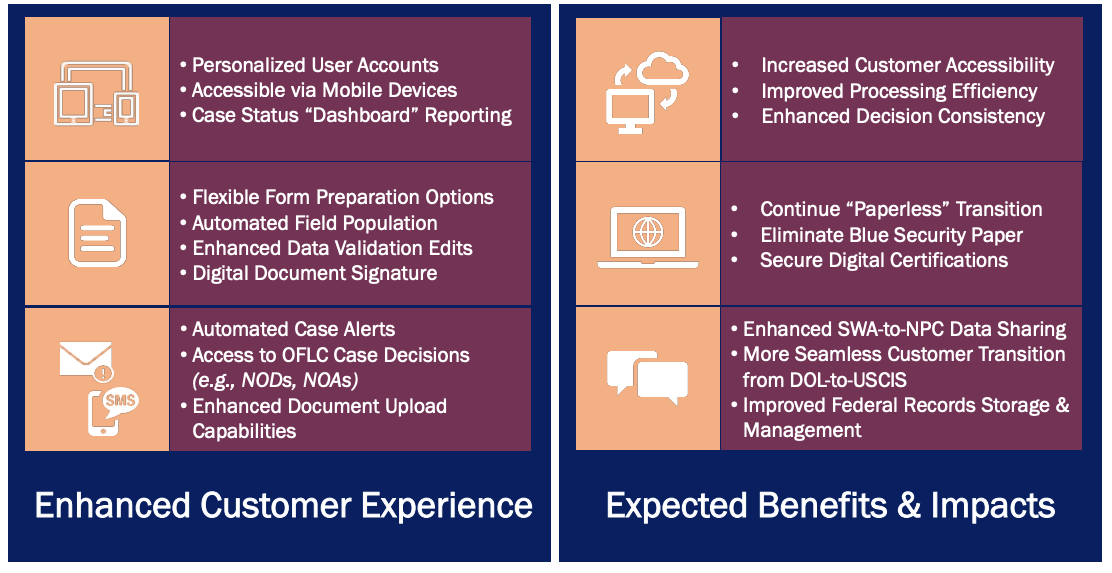 This sounds great. It’s exactly the kind of technology transformation we need in the immigration tech space - both within the government as well as on the consumer side. But while immigration tech has grown considerably over the last five years, much of that growth has been on the consumer side, including law firm case management, visa application apps and compliance automation. The government is finally starting to catch up, though, with efforts including automation at USCIS, and now at DOL, with FLAG.

So what’s the problem, then?

No one’s talking about FLAG, and it’s already here.

First and foremost, DOL actually launched the FLAG site to the public in December 2018, and even provided “information about the FLAG System and planned release schedule for 2019.” These aren’t my words - this is straight from their slide deck.

But this begs the question: what “public” was this site launched for, and who was aware of this planned release schedule?

I dug around the internet for hours, and the earliest mention I found of FLAG was a March 25, 2019 announcement by the DOL about temporary employment in the Commonwealth of the Northern Mariana Islands (CW-1 Workers). However, this is a very low-volume visa category - the FY 2019 cap for CW-1 workers was just 4,999 visas, meaning this was not on the radar for most law firms, immigration tech companies, and most importantly, HR teams hiring foreign workers. In other words, this “announcement” didn’t really get anyone’s attention.

I turned to tech-savvy immigration attorney Ron Matten, founder of Matten Law, to see if he knew anything about this. “The first I heard of it was yesterday, when I saw the link posted on DOL’s website,” he told me. “Did I miss a memo somewhere along the way?”

No, I answered, while scratching my head. I wondered - how many more people are totally in the dark about this? And how disconnected is DOL’s tech “rollout” from the actual users it promises to serve?

I then spoke with Fragomen partner Kevin Miner, who had heard of FLAG, but only a few weeks ago for the first time during a DOL stakeholder meeting in Washington, D.C. And what he knew about the system was limited to that very same slide deck I mentioned in the beginning, as well as some poking around he and his team did in the system. Even with that limited information, his team immediately noted a few concerns.

"The main struggle is access,” Miner told me. “The dual authentication login process is great for security, but takes a lot of time.” A username and password aren’t enough, he explained. You get a security code texted to you every time you want to log in. Does this mean partners will now be forwarding one-time security code texts to their paralegals every time the paralegals need to log in? “There are also questions around access and permissions within a law firm setting,” Miner went on. Will the same paralegal, for example, be able to log into the system on behalf of multiple attorneys?

Things are far from clear at the moment. But in my view, the biggest hurdles are yet to come.

How will the H-1B process be affected?

Most importantly, at least from my perspective, is the extent to which the H-1B process will be affected.

First, the DOL announced just two days ago on June 4, 2019, that “Beginning Monday, June 10, 2019, OFLC will accept online submissions of the Application for Prevailing Wage Determination (Form ETA-9141) in the FLAG System covering all visa programs.” The kicker: iCERT will shut down its Form 9141 capability that very same day. I have a strong feeling their tech support team will be pretty, pretty, pretty busy that day.

And keep in mind that Form ETA 9141, Application for Prevailing Wage Determination, applies to the Labor Condition Application (LCA) as well, which is required for H-1B applications. So will H-1B attorneys, paralegals and in-house HR specialists now have to submit PWDs through FLAG? It sounds like the answer is yes, but it’s hard to be exactly sure.

Second, and most aggravating, is the fact that DOL plans to migrate the LCA application itself sometime between October and December, taking it off iCERT and moving it to FLAG. Remember that 4,999 number I mentioned above with regards to CW-1 visas? Well, LCA volumes are a bit higher… 654,360 LCAs were submitted to DOL in FY 2018.

This has the potential to severely slow down the H-1B process. Just multiply the dual authentication delay by the huge number of LCAs submitted annually, and you’re guaranteed to get a headache just thinking about the potential logistical nightmares to come.

Keep in mind the timing, too. In the past, almost half of all LCAs have been submitted during H-1B cap season - that is, during February and March. This means that iCERT users will only have a month or two to get used to the FLAG system before being flooded with cap cases. 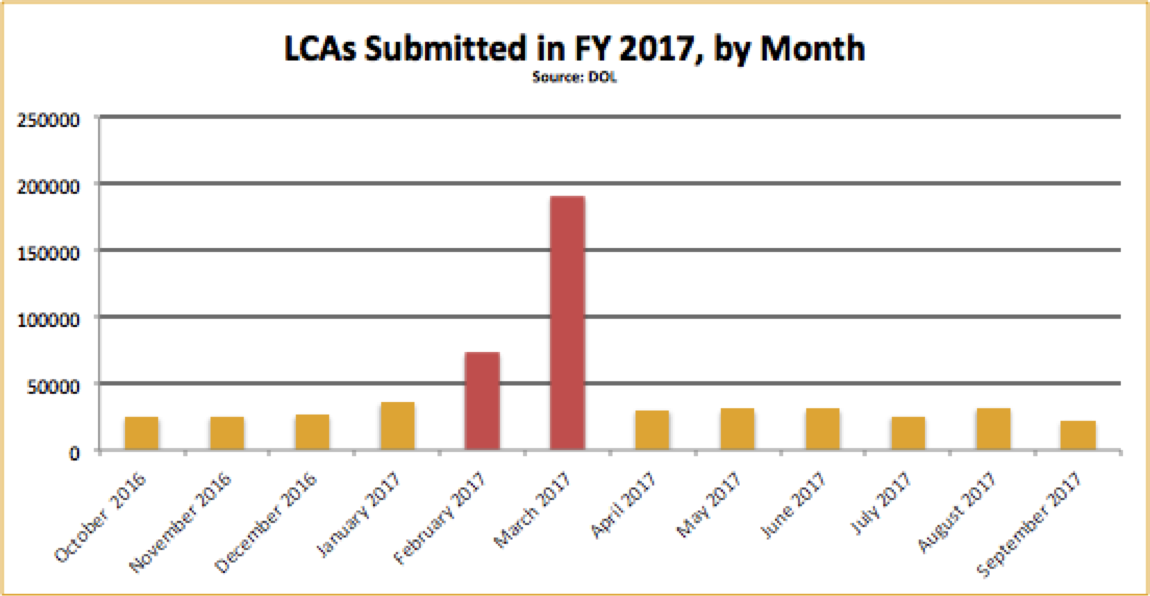 A silent launch. No grace period between FLAG going live and iCERT shutting down. A cumbersome login process. If you take all this together, DOL’s big tech innovation has all the signs of a potential disaster.

What about consumer-side immigration tech?

If you zoom out and look at the immigration tech ecosystem more broadly, there could be still more implications.

As the founder and CEO of LaborLess, which is laser-focused on automating LCA posting and public access file management, I’m intimately involved with DOL’s tech. And I have so many questions.

Will FLAG have API capabilities allowing us to feed directly into their system for both the PWD and the LCA itself? What technology stack is FLAG built on? I discovered through some deep Googling that FLAG will be built by Appian, a VA-based software company. But will it be a “low-code” product with presumably less back-end flexibility, or will it be built completely from scratch and therefore more technologically nimble?

And what of the case management firms that currently have complex code built around submitting LCA information into iCERT from their platforms? Will those features simply become non-functional when iCERT shuts down?

I actually reached out to the FLAG technical support team (you can too, here) with some of these questions a few days ago. Here’s what they responded with:

Thank you for your positive comments about FLAG and we appreciate all input received on ways to continuously improve the level of service we provided to employers.

This is what I would call a non-answer. Maybe if more people submit these and similar questions to DOL they will actually provide some answers.

I wish I had a nice, neat bow to tie around this article, but the truth is, I’m just writing it as I see it. Not only was there next to nothing on the internet about DOL’s FLAG system, there was absolutely no public discussion around it as far as I could tell.

I really wanted this article to be the backbone of the very first public discussion (as far as I could tell) about DOL’s FLAG system, and the comment area below to be where that discussion happens. So with that said, here are a few questions I have for you, the reader:

When I was at AILA’s inaugural immigration tech summit in May, I took the mic at one point during the very last session of the day and said publicly that I will push back on and call out DOL however I can when I see something that doesn’t make sense.

This is me trying to do exactly that.